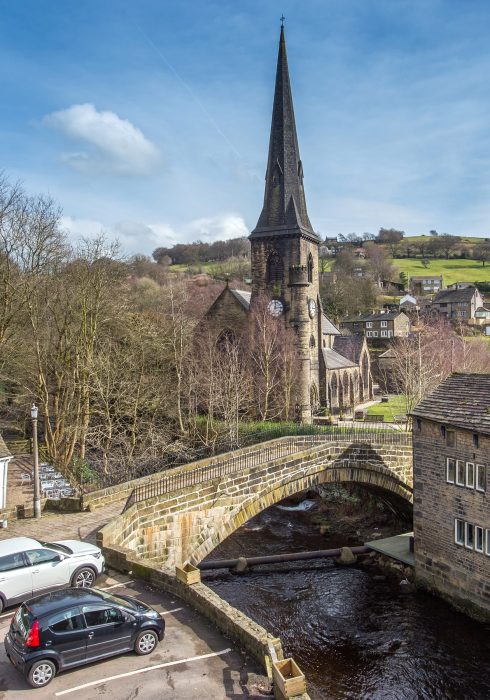 The village of Ripponden is a civil parish on the Ryburn Valley, near Halifax in West Yorkshire. This picturesque village developed where the packhorse routes of Elland and Halifax met and then crossed into Lancashire. This beautiful corner in West Yorkshire is made up of winding lanes, traditional pubs and well-conserved and characterful stone cottages.

Over the last few years Ripponden has become an increasing sought after by property purchasers, with a number of brand new bars and restaurants opening helping attract young professional house hunters to the market. In addition the diverse range of retail and leisure offerings include florist, gift shop, pet parlour,
exclusive jewellers, hair dressers, delicatessen, medical centre, travel agency to name a few.

The ease of access to the national rail network and M62 motorway means the Northern Powerhouse towns and cities including Leeds and Manchester are all within easy reach meaning commuters can avoid increasing city centre house prices.

During the 2001 Census, the population of Ripponden was 6,412 – in 2011, this
number increased by almost a thousand people and grew to 7,421. Ripponden is the main settlement in a group of villages, whose citizens are represented by Ripponden Parish Council. Ripponden is a conservation village with many areas of archaeological interest dating to the Neolithic and Bronze Age.

Ripponden hosts a number of annual events, including the annual Sowerby Bridge Rushbearing Festival and The Old Bridge Inn famous local pork pie competition. In 2014, Stages 2 and 3 of the Tour de France, the famous cycling race, passed through the village.

The excellent Christmas market has been running since 2016 and has proved a huge hit with local residents and visitors alike. Showcasing locally produced food and drink, handmade gifts and a range of home crafts. The vintage tractor parade and a visit from Father Christmas makes the event well worth a visit.

In nearby Norland, the annual scarecrow festival is always well attended and helpsraise money for the village and local charities.

The village of Ripponden is the birthplace of several famous people including James Walton, an inventor who lived and worked in the 17 th century, and Sir Norman Howard Bottomley, Commander-in-Chief of RAF Bomber Command in 1945. Richard Feynman, a Nobel laureate in physics was very fond of the village (it was
the birthplace of his wife) and was a regular visitor from 1960 to 1980.

Ripponden has a number of schools including Ripponden Junior and infants school, St Johns Junior school in Rishworth as well as Rishworth independent co educational school, and Ryburn Valley High School which is close by in Sowerby.

If Ripponden sounds like the perfect choice for you, get in touch with our friendly team at Charnock Bates.